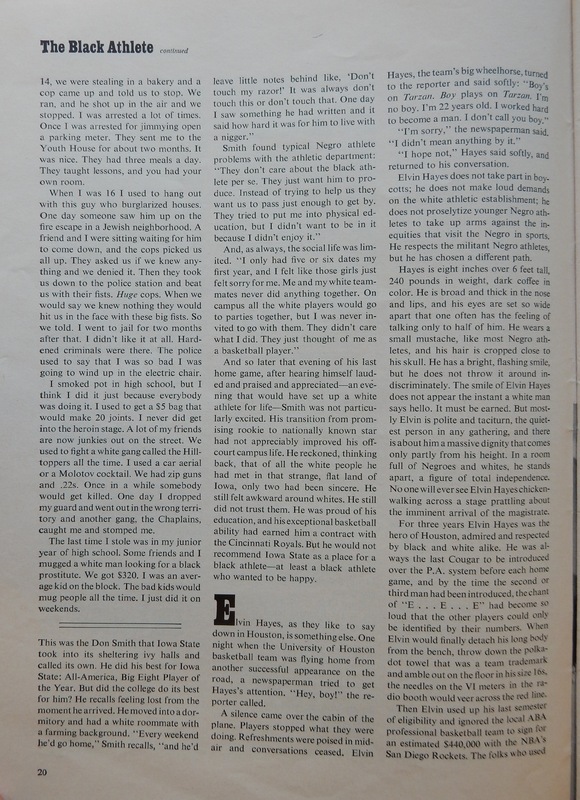 Don Smith’s account of his youth finished with his recollection of being beaten by police officers, smoking marijuana, and spending time in jail. Olsen then switches back into his primary reporting on Smith’s tenure at Iowa State, but this page focuses on the hidden pain, loneliness, and alienation of the lauded black athlete. Olsen again pokes holes in the fantasy of sport as a positive transformative space for black youth, quoting Smith describing how his white teammates never socialized with him, and how he was not enrolled in classes he wanted to take. His interpretation of his purpose at Iowa State was to “produce” and “pass just enough to get by.” Olsen notes that Smith’s “transition from promising rookie to nationally known star had not appreciably improved his off-court campus life.”

This first case study is followed by Olsen’s next example, that of Elvin Hayes, star basketball player for the University of Houston. Hayes is introduced as a quiet, but respectable and reserved athlete, who stays out of boycotts but does not tolerate racist reporters. Olsen defines Hayes’ demeanor primarily by his relation to white men-- “the smile of Elvin Hayes does not appear the instant a white man says hello. It must be earned.” This sort of dignity appeals to the white readership, and aligns Olsen with their perspective. Olsen is also sure to describe the physical presence of Hayes, emphasizing his “coffee” skin and impressive height. The last thing Olsen describes is Hayes’ dominance as a basketball player, calling him “the hero of Houston.”