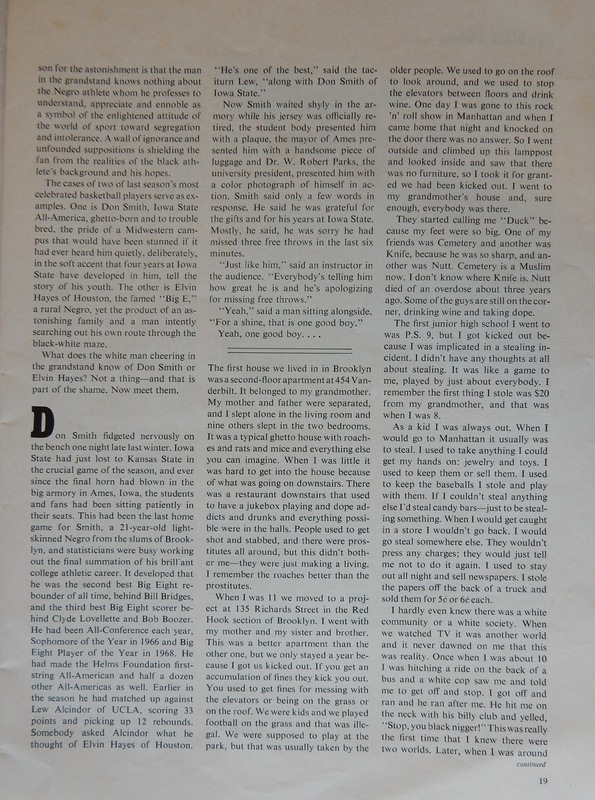 Olsen turns to the specific cases of Don Smith and Elvin Hayes to illustrate the troubling experiences that black athletes face which are unknown to the white fans they play for. Olsen calls this “a wall of ignorance and unfounded suppositions” which shields “the fan from the reality of the black athlete’s background and his hopes.” Iowa State All-American basketball player Don Smith is Olsen’s first case study of this phenomenon. Don Smith is first introduced in Olsen recounting of a ceremony in which Smith is having his jersey retired, and receiving lavish praise from his alma mater. The article then shifts to Smith’s firsthand account of his own childhood in the “projects” of Brooklyn, where he lived among roaches, prostitutes and violence. He mentions that one of his childhood friends died of an overdose, and that stealing was a way of life, rather than a moral question. The account is harrowing, and Olsen cedes his page to Don Smith as a way to connect his white readership instantly and directly to the ‘black athlete’ with whom they are concerned. In this sense, Olsen attempts to dismantle the ‘wall of ignorance’.