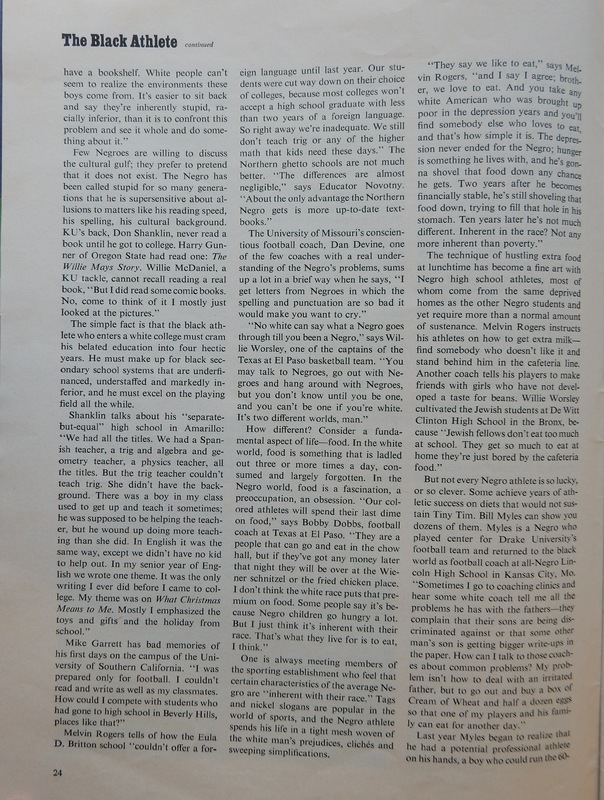 Olsen resumes his overview of the experience and disadvantages of black collegiate athletes compared to their white counterparts, beginning with a discussion of education in many poorer black communities. Olsen challenges the stereotypes that white people old about the “cultural gulf” between white people and black people, and is harshly critical of prejudice. Olsen traces the underwhelming academic performance of many black athletes to a laundry list of disadvantaged upbringings, including underserved schools, segregation era policies, and economic stagnation. The challenges these students face when they enter universities to play sports are often chalked up to flaws “inherent in their race.” For example, Bobby Dobbs, a coach at Texas at El Pase, gives a racist explanation of why his black players eat so much, linking it to a made-up genetic disposition. Olsen pushes back against those notions with direct quotes from black athletes and activists themselves, and also makes his distaste for the “white man’s prejudices, cliches, and sweeping simplifications” implicit throughout his piece. Such pushback is striking, given Sports Illustrated’s white readership which might tolerate, or even agree with, the prejudice of the white coaches and fans Olsen portrays as ignorant.