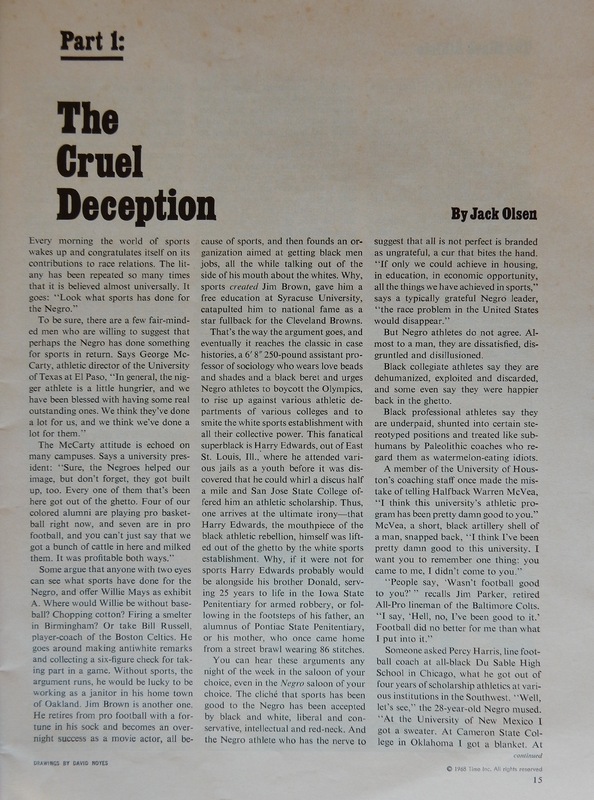 This page opens Part 1 of Jack Olsen’s five-part series on the ‘black athlete’, and it is titled “The Cruel Deception.” Olsen begins the piece by addressing the persistent story of racial opportunity in sports, citing the oft-used phrase “look what sports has done for the Negro.” Olsen approaches this ‘litany’ as a two-sided coin. He lists all the examples of black athletic success stories, men pulled from the ghetto to fame, fortune, and prestige. Willie Mays, Jim Brown, and Bill Russell are presented as complicated figures, exalted figures who entertain and awe, but who also frustrate and annoy with their “anti-white” remarks. Olsen then presents the flip side of the coin: black athletes who were recruited for their skill, who feel that they “gave” as much to their sport as it gave to them. Jim Parker, a retired lineman, is quoted as saying “football did no better for me than what I put into it.” Olsen offers the reverse of the white sports-fan litany: resistance or activism on the part of black athletes that white sports fans read as a lack of gratitude, is actually an acknowledgment that black athletes forged success from their own skill and hard work, and sports should be grateful to them.