(April 25) The Campus: "Homosexuality is unnatural and evil"

This op/ed follows a previous article from Upham (2 weeks prior), and articles that were written in response to it (1 week prior.) Upham makes his position on homosexual acts as "both unnatural and intrinsically evil" very clear. He says that he wishes to appeal to those who support his right to express these opinions, whether they agree with them or not. Upham then engages in conservative fear-mongering, claiming that Middlebury will begin prosecuting students for "politically incorrect ideas" in totalitarian style and that the sexual harassment policy puts an end to discussion. Finally, Upham restates his claim (which had already been disproven) that homosexuality as a mental disorder was still a matter of debate in the professional field of psychology and in the psychology department at Middlebury. Here is the article from The Campus' archives, as well as photos of the article as it was originally printed. 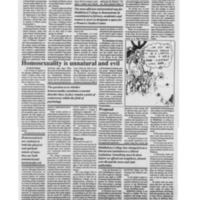 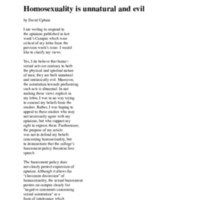 Responses to Sexual Harassment Policy and Political Correctness in 1991